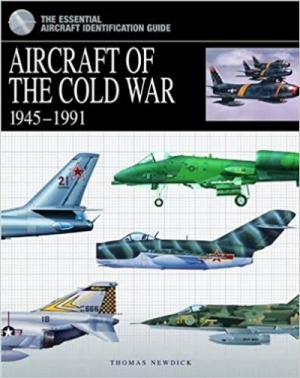 Illustrated with detailed artworks of combat aircraft and their markings, The Essential Aircraft Identification Guide: Aircraft of the Cold War is a comprehensive study of the planes in service with NATO and the Warsaw Pact and their respective units from the end of World War II until the reunification of Germany.

Arranged chronologically by theatre, the book gives a complete organisational breakdown of the units of both sides, including the units and aircraft used in the proxy wars fought in Korea, Vietnam, the Middle East and elsewhere as well as the`front-line' in Germany. Each section includes a compact history of the role and impact of aircraft on the course of the Cold War, as well as orders of battle, lists of commanders and aces such as Nikolai Sutyagin, Randall "Duke" Cunningham, Giora Epstein, and Majid Zugbi. Every type of aircraft is featured, including the numerous variations and types of well-known models, such as the MiG-15, the McDonnell Douglas F-15 and the Harrier, through to lesser-known aircraft, such as the Lockheed P-80, and the Myasishchev M-4 Bison. Each aircraft profile is accompanied by exhaustive specifications, as well as details of individual and unit markings.