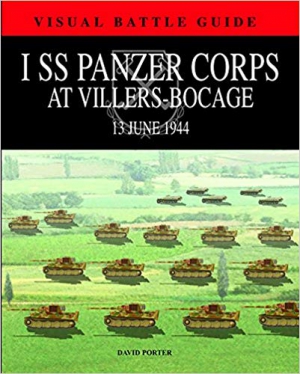 In the days following the Allied D-Day landings in Normandy on 6 June 1944, the German forces rapidly established strong defences in front of the city of Caen. On 9 June a two-pronged British attempt to surround and capture the city was defeated, but on the British forces' right flank, neighbouring American units had forced open a wide gap in the German front line. Seizing the opportunity to bypass Caen's defences, a mixed mobile force of tanks, infantry and artillery formed around the 7th Armoured Division's 22nd Armoured Brigade, advanced through the gap in a flanking manoeuvre towards Villers-Bocage.

Under the command of Brigadier William "Loony" Hinde, the 22nd Armoured Brigade group reached Villers-Bocage without serious incident, but as its lead elements moved beyond the town on the morning of 13 June they were ambushed by Tiger I tanks of the 101st SS Heavy Panzer Battalion. In less than 15 minutes numerous tanks and AFVs fell victim to the German force, the vast majority being destroyed by SS-Obersturmführer Michael Wittmann's tank. The Germans then launched an assault on the town. Although this was repelled, after six hours, Brigadier Hinde decided to withdraw his force to a more defensible position outside the town. The British successfully defended their position until a controversial decision was taken to pull the Brigade group back from its salient.

I SS Panzer Corps at Villers-Bocage has an eight-page gatefold depicting a Kampfgruppe (battle group) in battle deployment, with reconnaissance units, advance companies and the main body, to provide a visual guide to exactly how many tanks and other armoured vehicles were advancing on 13th June. The book itself provides background on the campaign and the units involved, a detailed breakdown of the battalion, its structure and equipment, its battle service at Villers-Bocage, and its service in the war after that point. Maps will be used to show the location of each element on the battlefield. The description of each part includes action reports, organization, equipment, unit commanders and much more. With a novel and accessible approach, the book will appeal to both the enthusiast and the general reader interested in World War II.