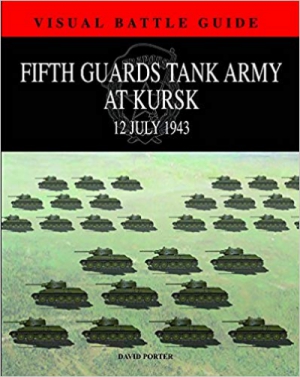 In the early summer of 1943, following the German defeat at Stalingrad, Hitler sought a decisive battle that would turn the struggle on the Eastern Front in the Germans’ favour. On the 5th July 1943, the Wehrmacht launched Operation Citadel. Attacking with a force of 3000 tanks and assault guns, the Germans faced a well dug-in force of more than 3900 Soviet tanks, with another 1500 tanks in reserve. The tanks advanced with as many as 50 vehicles packed together per kilometre of line.

What followed was the largest tank battle the world has ever seen, with both sides suffering heavy casualties. On the 12th July, three SS divisions – Totenkopf, Das Reich and Leibstandarte – attempted to break through the Soviet lines at the village of Prokhorovka, and so force the flank of the Soviet defensive position. Facing them was the newly deployed Soviet Fifth Guards Tanks Army. It was the Germans’ last chance for a potential breakthrough on the Eastern Front. The battle raged all day, with German attack followed by Soviet counterattack. By nightfall the Germans had lost more than 300 tanks and the Fifth Guards Tanks Army 50 percent of their strength. Despite their heavy losses, the Soviet defenders had achieved their aim: the German attack had been halted and all hope of their regaining the initiative lost.

Fifth Guards Tank Army at Kursk has an eight-page gatefold depicting one of the brigades from the Soviet Fifth Guards Tank Army in an innovative and fresh manner. This brigade is shown in battle deployment, with reconnaissance units, advance companies, the main body, the brigade command section, plus all the supporting engineers, signallers, artillery etc to provide a visual guide to exactly how many tanks and other armoured vehicles were advancing on the 12th July. The book itself is broken down by these sections, looking at each component part of the brigade in turn, their structure, equipment and what they did on 12th July. Maps indicate the location of each element on the battlefield. The description of each part includes action reports, organization, equipment, unit commanders and much more.