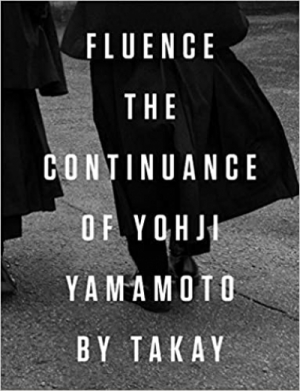 Fluence: The Continuance of Yohji Yamamoto: Photographs by Takay

An elegant, large-format homage to the Yamamoto look

This volume celebrates the creative power and style of the great Japanese designer Yohji Yamamoto. Shot in sensuous black and white, primarily in Tokyo, these previously unpublished images―by photographer Takay―respond to the iconic black designs and silhouettes of Yamamoto’s clothing, featuring some of Japan’s most accomplished actors, musicians and models, such as stage director Yukio Ninagawa, photographer Daido Moriyama, actress Rie Miyazawa, media artist Yoichi Ochiai and musician Char. The locations hark back to Japan of the 1980s, the end of the Showa era.

The seed for this book was planted many years ago, at the start of Takay’s career, when he worked on a Yamamoto project, and came to fruition after he was offered the use of the Yamamoto archive, which spans 40 years of designs. For Takay, Yohji Yamamoto’s work exemplifies a strong, avant-garde, masculine style, mixed with a keen Japanese sensibility and elegance.

Takay (born 1973) is a Japanese photographer based in New York, whose photographs have been featured in major fashion publications such as Harper's Bazaar, Vogue, L'Uomo Vogue and I-D, as well as in global advertising campaigns. His work has appeared in the Victoria & Albert Museum’s exhibition Men in Skirts, which traveled to the Metropolitan Museum in 2003; the Couture Chanel exhibition at the National Museum of China in Beijing; and the Met’s Spring 2013 Costume Institute exhibition Punk: Chaos to Couture. In 2016 Takay published the monograph Echos.