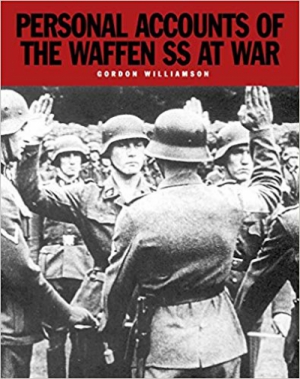 Personal Accounts of the Waffen SS at War

No military organization has fought as well against such overwhelming odds as the Waffen-SS, but few have earned such an infamous reputation in the process. Hitler’s elite proved itself in some of the most savage actions of World War II: the battle of Kharkov, the defence of the Demyansk Pocket and the Normandy landings. Certain units, however, also perpetrated atrocities against innocent civilians, while others were closely associated with the concentration camps.

Personal Accounts of the Waffen SS at War is the story of the men who wore the SS runes – told in their own words. Speaking candidly about their wartime service, former Waffen-SS soldiers of all ranks and nationalities talk about their training, indoctrination, combat on the Eastern Front, their commanders and political masters and the issue of atrocities. Illustrated with 150 rare black-and-white photographs, not only does Personal Accounts of the Waffen SS at War address one of the most fascinating organizations within the Third Reich, but unlike much history it offers personal accounts from inside the Waffen-SS. This book will appeal to anyone interested in the history of World War II and the Third Reich.