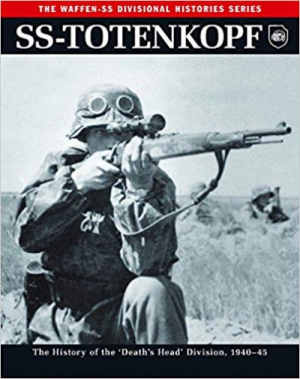 The divisions of the Waffen-SS were the élite of Hitler’s armies in World War II. SS-Totenkopf is an in-depth examination of one of the most famous – or rather, infamous – of these divisions: the ‘Death’s Head’ division.

The book explores the background to the unit’s formation from the early concentration camp guards; the men it recruited and the level of brutalisation to which they became accustomed; the key figures involved in its history, such as Theodor Eicke, its founding commanding officer; and the division’s organization. It also looks at the training regimen of the Waffen-SS, and the uniforms and insignia that members of the division wore. SS-Totenkopf also provides a full combat record of the division, which fought on both fronts during World War II, increasingly serving as a ‘fire brigade’ unit as the war turned against Germany, plugging gaps wherever they appeared in the front. The book outlines the unit’s involvement in the invasion of Poland, the fall of France, the invasion of the Soviet Union, the battle of Kharkov, the defence of Warsaw, and the final fruitless attempt to relieve Budapest in the last days of the Reich. Illustrated with rare photographs and written by an acknowledged expert, SS-Totenkopf is a definitive history of one of Germany’s leading fighting units of World War II.