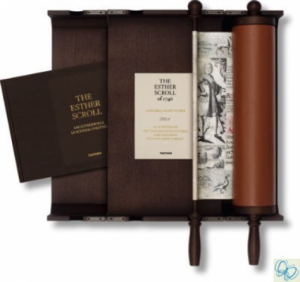 The use of scrolls dates back to ancient times, and one of the best known examples in history is the Esther scroll, or Hebrew megillah, which is devoted solely to the story of Queen Esther and is read on the feast of Purim. An uninhibitedly joyful festival, Purim celebrates the salvation of the Jews in the Persian empire of the 5th century under the rule of King Xerxes I. The word Purim is derived from the Hebrew "pur," meaning "lot," and refers to the fact that the Persian minister Haman determined by lot the time that all Jews should be destroyed. This circumstance, related in the Hebrew Bible’s Book of Esther, is publicly read out from the megillah in the synagogue at Purim.

TASCHEN’s facsimile of the Esther scroll is a major achievement in publishing history. It is produced from the very fine manuscript scroll held by the Gottfried Wilhelm Leibniz Bibliothek in Hanover, dated 1746 and measuring 6.5 meters long; this particular megillah is stunning not only in terms of its lavish illuminations but also because it contains a contemporary German version of the story of Esther. For many centuries, the creator of the Hanover scroll was unknown. Piecing together information from various sources, and performing his own stylistic analysis of this and other works of art from the period, author Falk Wiesemann recently made an enthralling discovery: the artist of the Hanover scroll was Wolf Leib Katz Poppers, a Jewish scribe and illustrator from Hildesheim.

Limited edition of only 1,746 copies

Cloth-bound and gilt-edged commentary volume by Falk Wiesemann contains an introductory essay, the biblical text of the Book of Esther in four languages and a fold-out sheet with an overview of all the illustrations