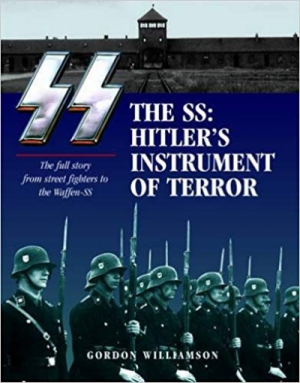 The SS: Hitler's Instrument of Terror

In the beginning just a handful of men were raised to be Adolf Hitler's personal bodyguard, the SS - meaning protection squad - this small group eventually became a multi-headed beast with many responsibilities. It ran internal security with ruthless efficiency; it implemented the horrific Nazi racial policy and ran the concentration camps; it was an important, and in the end solely reliable, part of the Reich's intelligence services; and perhaps most strikingly, it developed its own combat units.

Numbering over 900,000 soldiers by the end of 1944, the Waffen-SS (Armed SS) campaigned in Poland, western Europe, the Balkans and the Soviet Union, fighting to the end in the ruins of Berlin. SS: Hitler's Instrument of Terror is a balanced, authoritative account of Hitler's private army, the very cornerstone of the Third Reich's internal security forces. Every aspect of the SS is examined in full: its units and their battles, the foreign legions, the various non-military departments, and the key figures who led formations in the field and oversaw internal affairs within Nazi Germany, men such as Heinrich Himmler,`Sepp' Dietrich, Theodor Eicke and Kurt Meyer. In addition, the questions of atrocities committed against prisoners and civilians, and the SS's role in the concentration camp system, are addressed in full. SS: Hitler's Instrument of Terror is illustrated with 270 colour and black and white photographs, many from private collections and not seen before, and including 25 colour artworks. For any student of modern military history and elite fighting formations, this comprehensive work is bound to fascinate. The book is the definitive account of Nazi Germany's most notorious organization, and its important role in the Third Reich.