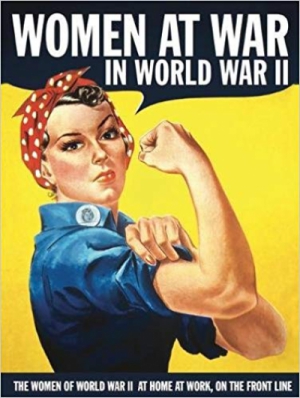 Women at War in World War II: The Women of World War II at Home, at Work, on the Front Line

When the men went off to the front in World War II, a huge vacuum was left behind in the family, in the workplace, and in society at large. Women soon stepped into the breach - in the factories, on the farms, in transport and public services, as well as in auxiliary military services, intelligence and espionage. Women endured the hardships of separation and rationing, as well as aerial bombardment, arrest, interrogation and perhaps imprisonment in a labour camp. Socially, women gained new skills and acquired a new sense of freedom, independence and equality, which they would take with them into the post-war world.

From a German pin-up to American photographers, from Japanese women's police to all women British orchestras, from Soviet women typists in the field to German pilots, from prisoners of war to secret agents, Women at War in World War II is a testament to these courageous and capable women and their experience, in both Allied and Axis countries. Included are first-person accounts, from the London air-raid warden to nurses caught in the raids on Pearl Harbor to flight technicians in Toronto. Authoritatively written and including 300 colour and black-&-white photographs as well as evocative artworks from the period, Women at War in World War II is a poignant tribute to the courage and bravery of those who served, and explores how their experiences forever changed the lives of women who followed.