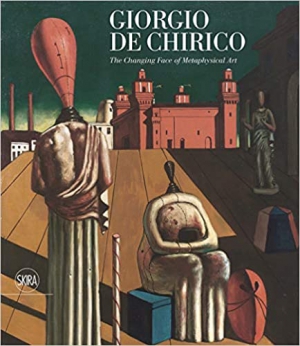 The first overview in decades of the eerie allegories of de Chirico, forefather of surrealism and genius of uncanny connections

Giorgio de Chirico began to develop his Pittura Metafisica, or Metaphysical Painting, around 1911, painting brooding, dreamy scenes of depopulated landscapes filled with incongruous objects. But though this is the work de Chirico is best known for, his Metaphysical Painting period lasted only until 1919, and he remained prolific and experimental throughout his entire long life (trying out, for example, a Return to Order and a Rubens-inspired neobaroque style).

In Giorgio de Chirico: The Changing Face of Metaphysical Art, the first de Chirico overview in more than 20 years, scholar Victoria Noel-Johnson explores the artist’s entire, complex career and proposes a cohesive logic within its diversity. Organizing the artist’s works thematically and reading them through the Nietzschean philosophy to which the artist was famously devoted, Noel-Johnson argues that despite de Chirico’s many changes in style, technique, subject, composition and tone over the course of six decades, all of his works offer tangible visions of intangible philosophical concepts.

Richly illustrated, this volume features works drawn from the artist’s foundation and some of the most prestigious museums and collections in Italy, presented alongside a rich core of archival documents including letters and period photographs.

Italian artist, writer and proto-surrealist Giorgio de Chirico (1888–1978) began to develop his Pittura Metafisica after traveling in Milan, Florence and Turin between 1909 and 1911, where he was inspired by the bright Mediterranean light, sun-drenched piazzas and receding arcades―elements that would become essential visual motifs in his best-known works.