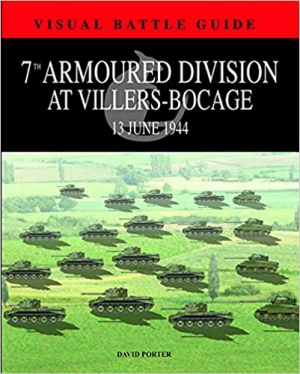 On the morning of 13th June, just a week after the D-Day landings, advance elements of the 22nd Armoured Brigade, 7th Armoured Division, were edging their way through the quiet Norman town of Villers-Bocage when a lone SS Tiger tank appeared on the road in the middle of the column. The Tiger quickly created havoc, knocking out at least 10 tanks and another dozen troop carriers, before being immobilised by a 6 pounder anti-tank gun.

So began a series of battles for the small French town that pitted the Tigers and Panzer IVs of the I SS Panzer Corps against British Cromwells, Sherman Fireflies and PIAT-armed infantry. 7th Armoured Division at Villers-Bocage offers a detailed guide to a representative selection of units deployed that day. Focusing on the 4th County of London Yeomanry and 1st Battalion, the Rifle Brigade, the book explores the structure of every element of a British armoured brigade, including an armoured regiment’s tank squadron, reconnaissance troop and communication troop, as well as a rifle battalion’s motorised company, support company and scout platoon. A special pull-out gatefold features those elements hat led the division’s advance into Villers-Bocage.

Each unit is carefully examined to show the order of battle, number of vehicles and number of personnel. Detailed, full-colour diagrams show every type of vehicle, from the Cromwell IV and M4A4 Sherman Firefly tanks of the armoured squadrons to the Universal Carriers and M5 halftracks of the motorised infantry. With the aid of maps, further chapters provide an operational context by examining the deployment, movements and effectiveness of the 22nd Armoured Brigade during the defence of Villers-Bocage. Highly illustrated with more than 150 diagrams, maps, artworks and photographs, 7th Armoured Division at Villers-Bocage offers the military enthusiast and wargamer a valuable resource for one of the key battles of the Normandy campaign.